Chrissy Teigen Teams Up With Target To Release A Cookware Line

Supermodel, best-selling cookbook author, and of course the mother of two and wife to singer John Legend, Chrissy Teigen has a new collaboration with Target.

On Thursday, Teigen announced that she would be launching a line of kitchen and table goods at the major retailer.

Called Cravings by Chrissy Teigen, there are about 40 items that make up the collection with items like $4 for glasses to $140 for a 12-piece cookware set.

The collection is set to launch in stores on September 30th and on September 18th, Teigen will release a special edition cookbook.

This collaboration has come full circle as Teigen has a history with Target. Her first major gig as a model happened to be in a Target catalog

“I remember they cast a younger girl as my little sister,” Teigen said in an interview on Target’s Web site.

“We shot the campaign in an inflatable above-ground pool and I pretended my ‘little sister’ was spraying me with a hose. I think it was used in Target’s weekly ads, but I’ve actually never seen the photo. Please find it for me, Target.”

Related Topics:
Up Next

Snoop Dogg Set To Release His Own Cook Book

Meghan Markle and Prince Harry shared a year-end video that includes a new photo of baby Archie with his father.

The caption accompanying the video on the Sussex Royal Instagram account reads: “Wishing you all a very Happy New Year and thanking you for your continued support! We’ve loved meeting so many of you from around the world and can’t wait to meet many more of you next year. We hope 2020 brings each of you health and continued happiness.”

Just sharing the sweetest Christmas Card from our President and Vice-President, The Duke and Duchess of Sussex. Very Merry Christmas, everyone! 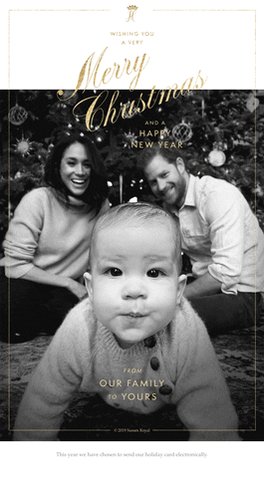 BALTIMORE – U.S. Rep. Elijah Cummings has died at age 68, his office announced Thursday morning.
According to WBAL, the Maryland Democrat died about 2:45 a.m. Thursday at Johns Hopkins Hospital in Baltimore “due to complications concerning longstanding health challenges,” his office said in a statement.
The news came one day after the Baltimore Sun reported that Cummings had not returned to Washington after having a recent “medical procedure.” His office did not say what the procedure was.
Cummings, who represented Maryland’s 7th District for more than 23 years, was the chairman of the House Oversight and Reform Committee. The Sun described him as “a key figure in the impeachment inquiry into President Donald Trump.” In a statement published Thursday morning on Twitter, Trump shared condolences for Cummings’ family.
“I got to see first hand the strength, passion and wisdom of this highly respected political leader,” he said. “His work and voice on so many fronts will be very hard, if not impossible, to replace!”
“I’m devastated by the loss,” House Speaker Nancy Pelosi said Thursday after meeting with Cummings’ wife to share condolences from her caucus. “She said what we all knew — he just fought to the end. But that’s the way he was.”
According to Cummings’ congressional website, the Baltimore native graduated from Howard University with a bachelor’s degree in political science before completing law school at the University of Maryland. He eventually was awarded 13 honorary doctorates, the website says.
Before he was elected to the U.S. House of Representatives, Cummings was a member of the Maryland House of Delegates from 1983 to 1996. Cummings’ website says he was “the first African American in Maryland history to be named speaker pro tem.”
Cummings is survived by his wife, Maya Rockeymoore Cummings, and three children, the Washington Post reported.
After learning of his death, friends, colleagues and other public figures remembered Cummings on Twitter, calling him a “patriot” and a “warrior.”
Continue Reading

In a Monday news release, the Food Safety and Inspection Service said Ohio-based Kenosha Beef International “is recalling an undetermined amount of seasoned beef products that may be contaminated with extraneous materials, specifically metal shavings.”

The recall includes Taco Bell Seasoned Beef Taco and Burrito Filling produced from Sept. 20 to Oct. 4, according to the announcement. The affected products, which come in cases that contain eight 5-pound bags and bear establishment No. “EST. 10130,” have use-by dates of “L2 11/4/19” to “L2 11/18/19,” the release said.

Restaurants that have the products should discard or return them, officials said.

Although Kenosha Beef told federal officials Saturday that three customers had complained about the products, “there have been no confirmed reports of adverse reactions,” the FSIS said.

Early Tuesday, Taco Bell announced that it had issued a voluntary recall Friday for 2.3 million pounds of seasoned beef sent to distribution centers in Ohio, New York, New Jersey, Virginia and Michigan, which shipped the products to restaurants in 21 states. All of the locations had removed the affected products by Monday night, the chain said in a news release.